Cologne, 03. Mai 2012 – On time beginning Easter holidays, the hospital was ceremonially commissioned to the general public on April 3, 2012. „Our thanks go directly to Fred-Eric Essam for his tireless humanitarian commitment for the improvement of the living conditions of the local population“ said president Pascal Zoua of CODEBO, the local village development community, in front of a big audience. „The own luck is that of others“ said CODEBO director at the beginning of his speech and brought words of praise for his guest from Germany at the same time. He reminded the role the hospital will play for Zaklang and its neighboring localities  Pouhoré, Gazaro, Modjombodi and others. 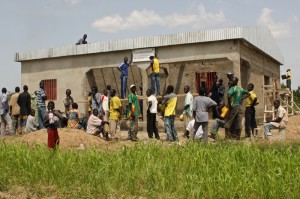 The project for the rehabilitation of the Zaklang hospital close to Boboyo emerged from a conversation between Fred-Eric Essam, chairman of ident-africa e.V. and the village elder of Zaklang during a project journey in March 2010. After more than a decade of construction disruption, the building shell was degenerate and required new planning. The ensuing new construction and erection of the hospital, which was supported by local people with stones, sand and water carrying, was backed up by 16 helpers from Germany in October 2010. Nearly 10000 Euro were required to finish the building with its six rooms including furniture, three tables, six benches, nine chairs, three cupboards, two beds and matresses, a year later.

„Who brings health brings life“. These were the words of the representative of the Kaele health district, Mr. Bello. In his speech he remarked, how important it is to build hospitals close to the population and appealed to the beneficiaries to actively participate in national health programs and to fight malaria determined by the utilization of mosquito nets.

For Fred-Eric Essam, the fight against poverty begins with an adequate medical basic services for the rural population and especially for children and women. The latter contribute tremendously and tireless for the sustainable improvement o their living spaces.

Finally, the chief officer of the Kaele district exchange attributed the success of the project as a symbol for the good and successful colaboration between Germany and Cameroon in his region to ident.africa e.V.

The ceremony ended with the symbolic cutting the ribbon by the chief officer of the Kaele district exchange and an aperitiv with all invited guests.