Fred-Eric Essam, a senior solution sales professional for IBM Germany whose native country is Cameroon on the West Coast of Africa, founded the not-for-profit organization, ident.africa, to balance the education deficit on the continent. Based on a research project and with the help of architectural experts from Germany and Cameroon, a preschool of traditional design, meeting climate induced aspects and using building materials from the surrounding area, will be built in the village of Boboyo in the north of Cameroon in 2013. This promises an economical use of resources and thereby conforms to the objective of sustainability, while providing early education to 120 children in a country where education is still a privilege. 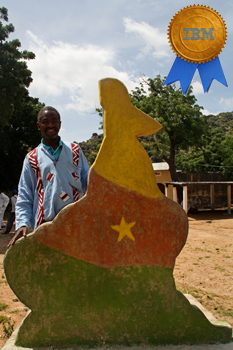 As a teenager in Douala, Cameroon’s largest city—an urban and commercial center very different from his father’s life in the rural north— Fred-Eric Essam, a senior solution sales professional for IBM in Germany, received a unique opportunity that would set him apart from many of his Cameroonian peers: he was given a scholarship to study biomedical engineering in Germany.

Fred-Eric recalls a visit he made to his father’s village after earning his degree. “In 2001 I had the opportunity to visit the ancestral home of my late father in Boboyo, in the Far North region of Cameroon in Africa. Though it has gotten better, I left concerned about the region’s lack of educational and health infrastructures.”

The visit reminded Fred-Eric of how fortunate he had been and how much more needed to be done to help other young people in Cameroon. “I realized that we could play a role providing basic education and a better future to children by supporting village health-projects and actively participating in the transformation of rural societies,” says Fred-Eric.

Fred-Eric met with friends and colleagues, several of them from IBM, to discuss how they could positively impact rural development in Africa. In 2004 they established a not-for-profit organization called ident.africa “to balance the education deficit in Africa.” The organization has grown to 24 volunteers based in Cologne, Germany, and has a coordinating office based in Douala with a Cameroonian team including Fred-Eric’s mother and several siblings.

In 2011, with the help of an IBM Community Impact Grant, Fred-Eric and ident.africa initiated an interdisciplinary research project between the German university RWTH Aachen and the University of Maroua in Cameroon. Researchers are examining local architecture and traditional methods of construction, and comparing those to building styles in other regions with a similar climate, in order to develop plans and ultimately construct a pre-school for 120 children in Boboyo that makes the best use of local materials and is optimized for climate, sustainability and efficient design.

The project is an example of education enabling education as it will result in a pre-school for children who may eventually attend the University of Maroua, in a country where, as Fred-Eric says, “education is still very much a privilege.” He adds, “I know it’s lofty, but I hope through the project to help kids get access to education at an earlier age and help African people impact the world and achieve excellence.” Outcomes, and waiting out the rain

An additional project is underway to set up solar panels on a multi-purpose hall in Boboyo. Among its uses, the hall serves as a sewing room where those who have finished their schooling can develop an additional practical skill. With the solar-powered electricity, the building will be used for adult education courses in the evenings, as classes can be added after the sun goes down, increasing opportunities for the community—a noteworthy outcome.

In fact, Fred-Eric and his team used the IBM Activity Kit “Measuring Success with Outcomes” to help determine how the continuous promotion of ident.africa activities, in cooperation with other organizations or universities, could lead to innovation, and how the knowledge can be transferred to Africa’s communities. Keeping focused on positive outcomes has helped ident.africa endure the typical challenges new organizations face, such as dealing with extra documentation and high customs taxes transporting the solar panels for the multi-purpose hall.

Fred-Eric remembers another bump in their quest of outcomes. Cameroon gets very little rain, but when more than 5,000 people from the Boboyo community gathered to celebrate a donation of books, pens and textbooks for 750 students, rain poured down. “I was so sad that all the event planning seemed to be ruined,” says Fred-Eric. However, he adds, “To our surprise the sun came out after exactly 20 minutes of heavy rain and we continued the ceremony as if nothing happened before.”

Reflecting back on his organization’s short history, Fred-Eric says, “We’re helping create new leaders, particularly women, which in my opinion is one of the best ways to dramatically impact changes in the village.” He adds, “It’s the realization of a dream to help bring to Africa the opportunities I received in the north. I’m trying to bring my modest contribution to transformation in Africa, particularly in Cameroon.”
Source: ibm.com