The surgical operation lasted a whole morning on 29.07.2018. According to the operating doctor, the whole operation ran without complications. Paul Junior is since then doing very good. He now receives liquid food over the next few weeks so as not to interfere with the healing process. His mother has to buy clean drinking water every day from a discount store so that Paul Junior comes into contact with as few germs as possible. The doctor prescribed it after the chirurgical operation. In Cameroon, the availability of drinking water is still a major problem. 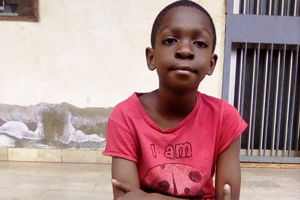 After the operation: Paul Junior looking  into a better future

Tap water, when it flows is inedible. A great challenge for everyone, even in the capital. With the donation Paul Junior’s mother will be able to get water. “We expect Paul Junior to start the language exercises before the end of the year.” the doctor assured. Now Paul Junior wants books, notebooks and pens for the start of school in September. He wants a bike, too.

Paul Junior Eyada was born on December 20th. 2009 in Yaoundé, the capital of Cameroon, with a cleft lip and palate, a malformation in which his lips, upper jaw and palate did not grow together completely. At the age of 2, only his lip was closed during an operation. So Paul Junior had to live on with an open palate, which severely affected him in terms of language as well as at school and in everyday life. 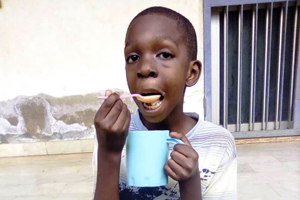 Paul Junior after the operation: he can finally swallow properly

During a visit to Cameroon in September 2017, Fred-Eric Essam met Paul Junior’s mother, Marie Ange Ekomo. She told about her son’s illness, the lack of support from both the family and the state. There is no health insurance system in the country. It’s every man for himself. “I was shocked by the situation and the lack of help for Marie Ange and her son. I therefore decided to support and started a fundraising campaign to help the boy quickly. Friends raised €2,300,” says Fred-Eric.

So 6 months later, thanks to donations from Germany, the operation could be carried out on site in Cameroon. Now the family is regaining hope for a better life for Paul Junior. Thanks to the donations, Paul Junior can also be supplied with books and exercise books in the school in the long term. His school fees can be paid. Also therapeutically (language, hearing, etc…) and psychologically the boy can be specifically promoted. 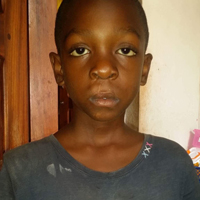 “We expect that Paul Junior will soon speak and eat properly, live his childhood to some extent and finally enjoy laughing with his playmates.” reports Fred-Eric Essam.

Marie Ange, mother of Paul Junior, 28 years old, is a single mother and lives on odd jobs. That’s why she had her son go to school with her grandmother in Bafia, a town 150 km from the capital of Cameroon. He’s still registered here. However, it is planned that Paul Junior will live in Yaounde with his mother, Marie Ange, and go to school there. He’ll have to repeat the 4th grade. Due to his linguistic disability and the preparations for the operation, he was unable to finish school last year. In this way, his mother will be able to ensure that aftercare and subsequent language assistance can be provided professionally.
Finally she can believe in a better future for her son.